A New Technology Could Prevent Fires Caused by Lithium-Ion Batteries 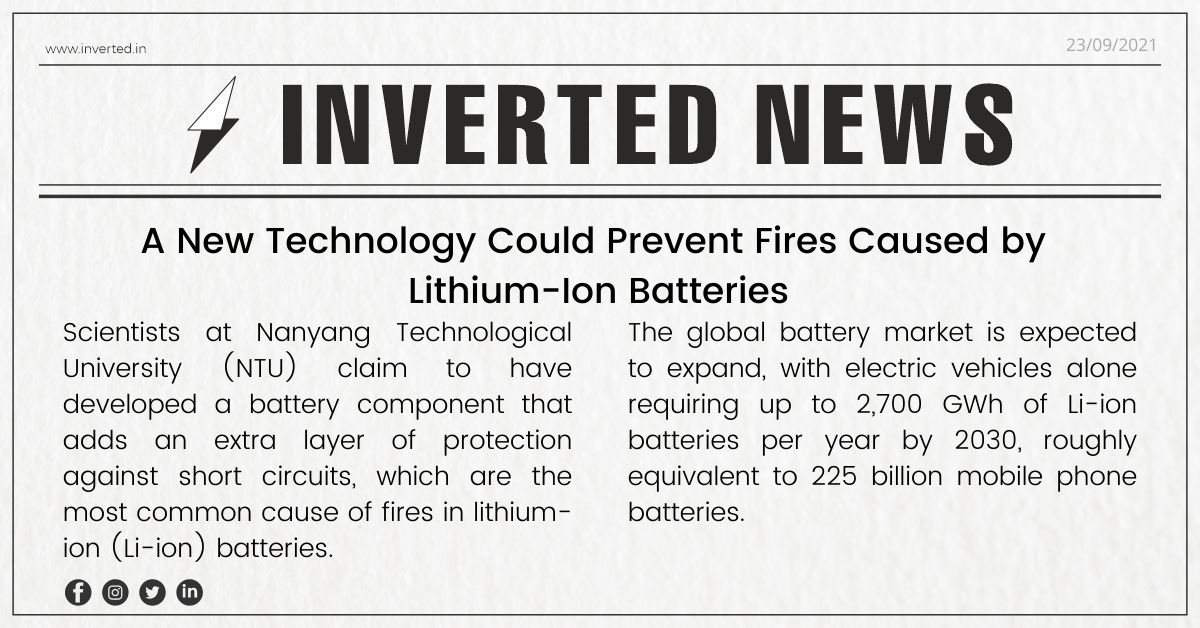 Scientists at Nanyang Technological University (NTU) claim to have developed a battery component that adds an extra layer of protection against short circuits, which are the most common cause of fires in lithium-ion (Li-ion) batteries. To prevent short circuits during charging, the “anti-short layer” can be readily added to Li-ion batteries.

In Singapore, there were 26 power-assisted bicycle fires and 42 occurrences of personal mobility device fires in 2020, despite an expected failure rate of less than one in a million.

The need of the hour is for a means to prevent battery fires. The global battery market is expected to expand, with electric vehicles alone requiring up to 2,700 GWh of Li-ion batteries per year by 2030, roughly equivalent to 225 billion mobile phone batteries.

The primary cause of battery fires is a build-up of lithium deposits known as dendrites that cross the separator between the cathode and anode electrodes of the battery during charging. As the dendrite thickens, a short circuit occurs, resulting in an uncontrollable chemical fire.

Professor Xu Zhichuan and his research team from the School of Materials Science and Engineering devised an additional “anti-short layer” on the separator to prevent any dendrite from reaching the cathode and causing a short circuit.

“We know that for a Li-ion battery to work, Li-ions must be able to travel between the positive and negative sides during charge and discharge cycles. However, the transfer of the Li-ions also means the formation of dendrites is inevitable for current commercial Li-ion batteries,” explains Prof Xu, Cluster Director of Energy Storage and Renewables & Low Carbon Generation NTU.

“Instead of preventing the formation of dendrites, we decided to make use of their intrinsic properties by coating an additional layer of conductive material on the separator for these dendrites to connect. Once the dendrites make the connection, it will not be able to continue their growth further, thus preventing them from ever reaching the other side.”

The invention was tested in over 50 cells with various Li-ion battery compositions. Even when the battery cells were utilized past their lifecycle, they say no short circuits were observed during the charging period.

The anti-short layer, according to the researchers, is a common material used in battery manufacture. The team believes that the cost of implementing this technology will be roughly 5% more than the current Li-ion battery production cost. Because of the cheaper cost, businesses can quickly adapt and scale up the new technology.

NTUitive, NTU’s innovation and enterprise organization, is commercializing the technology, which is presently patent-pending.