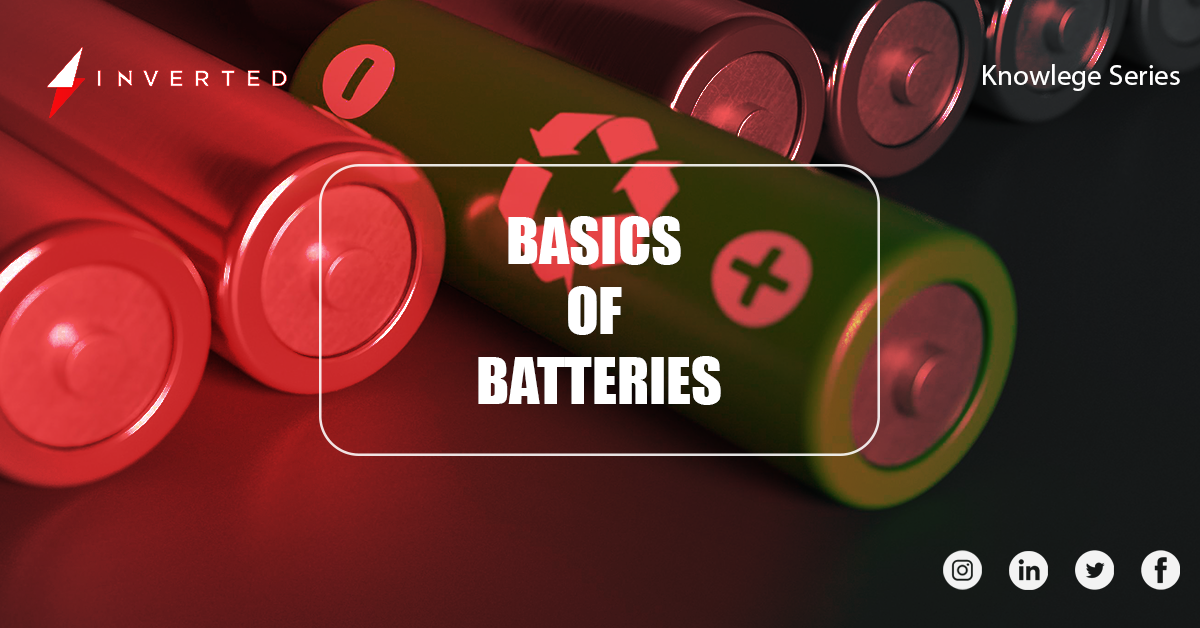 At Inverted we have started a knowledge series where we are trying to educate anyone and everyone about the batteries. We will be publishing weekly chapters within this series.

The basic working structure of batteries

All the batteries have the same working structure and elements. Every battery has 3 elements.

Anode – A negative electrode. A material that undergoes oxidation during the cell discharge.

Cathode – A positive electrode. A material that undergoes reduction during the cell discharge.

Electrolyte – A medium for ion transfer. A medium, usually liquid, through which ions move from one electrode to the other during the cell discharge.

The metal ion in the solution will accept one or more electrons from the cathode at the cathode, reducing the ion’s oxidation state to ZERO. This results in a solid metal forming on the cathode.

The two electrodes must be electrically connected to allow electrons to travel from the anode’s metal to the ions on the cathode’s surface via this connection. 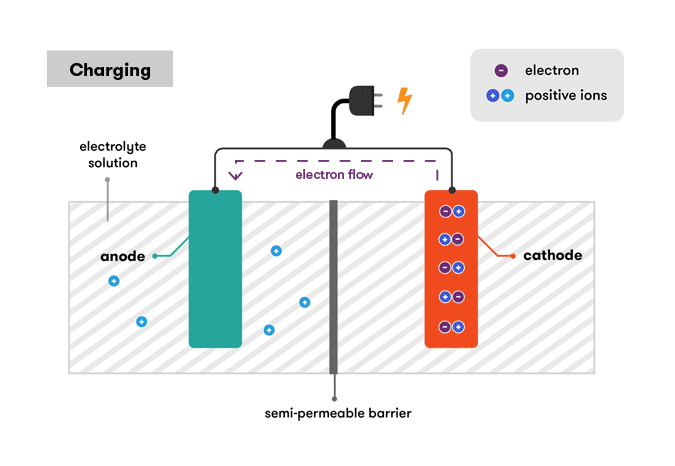 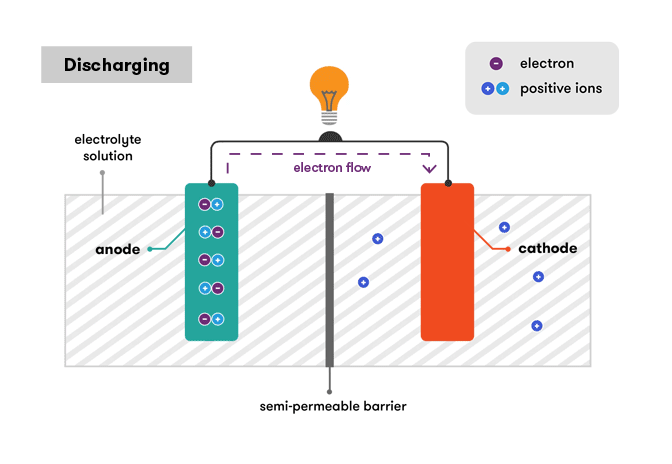 Understand the basic terminologies of batteries like the voltage, current, power, capacity.

Voltage = The force with which the reaction driving the battery pushes electrons through the cell is known as voltage. This is also known as electrical potential, and it is determined by the potential difference between the reactions that take place at each of the electrodes, or how forcefully the cathode will draw electrons (via the circuit) from the anode. The more work a certain number of electrons can do, the greater the voltage.

Current = The number of electrons traveling through any one point of a circuit at any given time is known as current. At the same voltage, the higher the current, the more work it can do. Current can alternatively be thought of as the number of ions passing through the electrolyte multiplied by their charge within the cell.

Power = voltage x current. The higher the power, the quicker the rate at which a battery can do work—this relationship shows how voltage and current are both important for working out what a battery is suitable for.

Capacity =The capacity of a battery is the battery’s power as a function of time, which is used to indicate how long a battery can power a device. A high-capacity battery will be able to stay going for longer before running out of power or current. Some batteries have a tragic quirk: if you try to pull too much power from them too rapidly, the chemical reactions can’t keep up, and the capacity is reduced! As a result, we must always be cautious when discussing battery capacity and keep in mind what the battery will be utilized for.

Now as we have a basic understanding of the batteries, now let’s move towards the lead-acid and lithium-ion batteries.

The capacity of a battery is a measurement of how much energy it can store (and finally discharge). While capacity numbers differ between battery models and manufacturers, lithium-ion batteries have been shown to offer a better energy density than lead-acid batteries. This means that a lithium-ion battery can store more energy in the same physical space. Lithium-ion technology allows you to store more energy and discharge it faster, allowing you to power more appliances for longer periods of time.

A battery’s DOD (depth of discharge) is the percentage of the battery that can be safely drained of energy without damaging the battery. While it is normal to use 85% or more of a lithium-ion battery’s total capacity in a single cycle. Lead-acid batteries should not be discharged past roughly 50%, as doing so negatively impacts the lifetime of the battery. The superior depth of discharge possible with lithium-ion technology means that lithium-ion batteries have an even higher effective capacity than lead-acid options, especially considering the higher energy density in lithium-ion technology mentioned above.

Battery efficiency, like solar panel efficiency, is an important parameter to consider when evaluating various choices. The majority of lithium-ion batteries are 95% or more efficient, which means that 95% or more of the energy stored in the battery can be used. Lead-acid batteries, on the other hand, have an efficiency of around 80 to 85%. Higher efficiency batteries charge faster, and improved efficiency equals a larger effective battery capacity, similar to the depth of discharge.

Batteries, like solar panels, deteriorate over time and become less effective as they get older. One “cycle” is defined as the process of discharging a battery to power your home or appliances and then recharging it with solar energy or the grid. Although the figures vary per study, lithium-ion batteries often last many times as long as lead-acid batteries, resulting in a longer effective lifespan for lithium-ion goods.

So now, we believe you have a basic understanding on what is a battery, how it works and why lithium-ion batteries are better than the lead-acid batteries.

In the next chapter we will talk about the types of lithium-ion batteries and let you know what type of batteries we develop at Inverted Energy.