Charging Process of Lithium ion batteries:
A typical charging process of a single lithium battery cell is shown in Fig. below. It consists of two stages. During the first one a constant current (CC stage) is applied to the cell, causing a voltage increase from 3.0 V, associated with a depleted state, up to 4.2 V which corresponds to the nominal cell voltage.

At this point the cell voltage is controlled to remain constant (CV stage) until the current reaches a value close to zero.

They also differ in their C rates. Ultra fast chargers require higher C rates and hence higher value of currents as depicted in table below.

An ultra-fast charger can be compared to a high-speed train traveling at 300km per hour. Increasing power is relatively simple. It’s the track that governs the permissible speed of a train and not the machinery. In the same manner, the condition of the battery dictates the charging speed. Hence, fast charging is more about lithium ion chemistries than the power of the charger. Lithium cobalt oxide (LiCoO2), which has high energy density, tends to be the preferred chemistry for this type of application.

1. The battery charging time can be reduced increasing the value of the current employed at the CC stage, but high currents can reduce the time of life of the cell or cause permanent damage as depicted in figure. The longevity can further be prolonged by charging and discharging below 1C; 0.8C is the recommended rate. 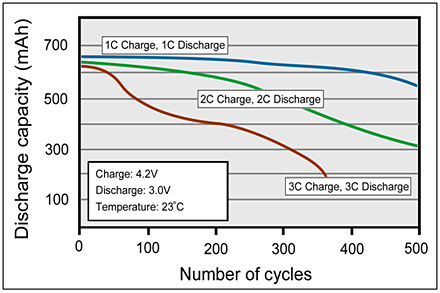 2. To operate at power of around 150 KW or higher during ultra fast charging, current existing Li ion battery has to weigh around 1000 kg as most Li-ion battery only produces about 150Wh per kg.This is not practical to have a battery with such heavy weight. Remedy is to choose the high voltage inorder to reduce the battery weight during fast and ultra fast charging.

3. Stresses occur in the second half of the charge cycle towards top charge when acceptance of lithium ions in the anode of Li-ion becomes labored. This can cause rupture.

4. It can cause deposition of lithium as follows:

1. Resistance of the cells must be lowered by using thin materials, increasing the amount of current collectors, and increasing the electrolyte concentration and reducing its viscosity with solvents. 2. In EVs, the Pulse-Charging technique is commonly used as fast charging method for lithium-ion battery pack. Pulsed chargers feed the charge current to the battery in pulses. During the charging process, a short rest period of 20 to 30 milliseconds, between pulses allow the chemical actions in the battery to be stabilized by equalizing the reaction throughout the bulk of the electrode before recommencing the charge. This method can also reduce unwanted chemical reactions at the electrode surface such as gas formation, crystal growth and passivation. At this stage, it is possible to charge the battery at high current flow which makes charging faster for battery without any damage of gas release.