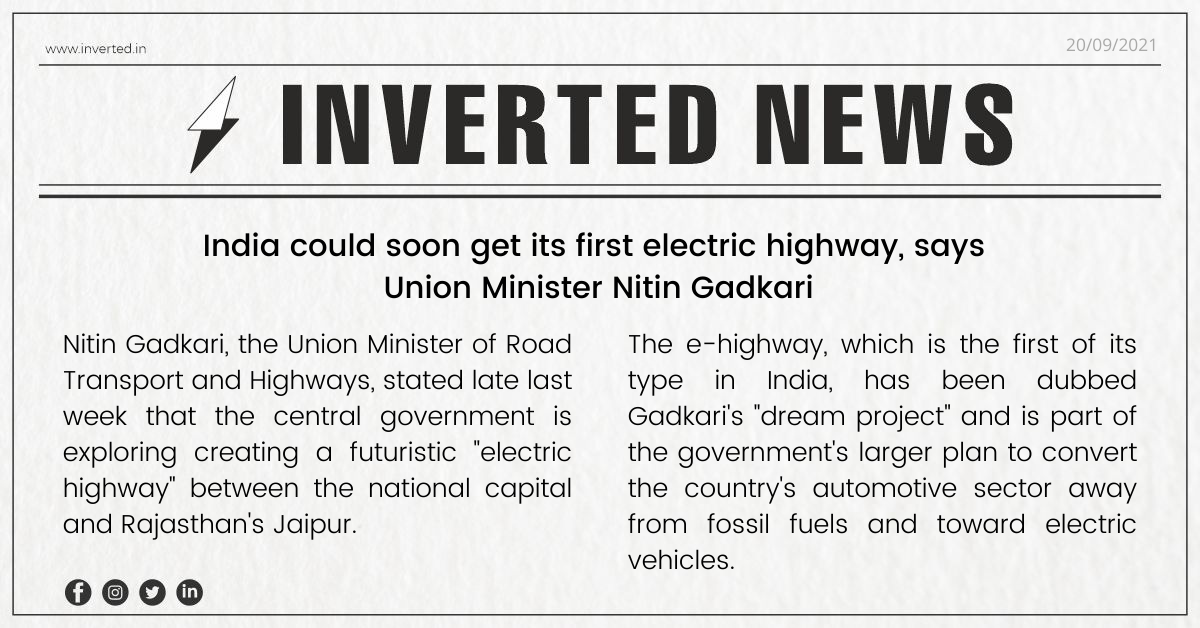 Nitin Gadkari, the Union Minister of Road Transport and Highways, stated late last week that the central government is exploring creating a futuristic “electric highway” between the national capital and Rajasthan’s Jaipur.

The e-highway, which is the first of its type in India, has been dubbed Gadkari’s “dream project” and is part of the government’s larger plan to convert the country’s automotive sector away from fossil fuels and toward electric vehicles.

What is an electric highway?

The concept of an electric highway has gained traction in recent years, with electric vehicles generally being pushed as the future of transportation if the world is to fully solve the climate catastrophe.

The proposed electric highway will allow electric vehicles to travel the length while being charged. A pantograph model is one where a contact arm is situated above a freight or electric vehicle and is connected to an overhead cable via which an electric current is run, according to a report from The Print. In Germany, a roadway with identical technology has been built.

This approach is an alternative to the conduction model, in which a vehicle’s contact arm is positioned below it and connects to an electromagnet-equipped road. The induction type, on the other hand, does not use a contact arm, instead of charging automobiles using electro-magnetic technology located alongside the road.

Which other nations have electric highways?

In Germany and Sweden, electric motorways are already in use. Sweden’s first electrified route, which opened in 2018, allows electric vehicle batteries to charge while driving along with it.

In 2019, Germany’s first electric motorway went live. Hybrid trucks can convert to electric propulsion totally while traveling down this length, then easily switch back to hybrid propulsion when they exit. The Siemens-constructed motorway, which stretches for 6 miles south of Frankfurt, was built by Siemens.

Siemens calculated in a paper that if 30% of Germany’s highways were electrified, carbon emissions would be cut by seven million tonnes.

Electric roadways are also being built in the United Kingdom and the United States, according to reports. Carbon emissions might be dramatically reduced by installing overhead cables on electric highways, according to a paper financed by the UK government and published in July 2020.

When is the electric highway expected?

Gadkari did not mention a timeframe for the electric roadway in his speech, merely stating that “it is still a proposed project.” We’re having talks with a foreign company.” According to some reports, the company in question is Swedish, while others claim that building on the motorway might begin as early as mid-2022.

Gadkari outlined an e-highway proposal along the Delhi-Mumbai Expressway during Question Hour in the Lok Sabha in March this year, saying, “Buses and lorries may operate on this e-highway at a speed of 120 kmph and will bring down logistical costs by 70%.”