The Challenge Of Lithium-Ion Dependency In India’s EV Adoption 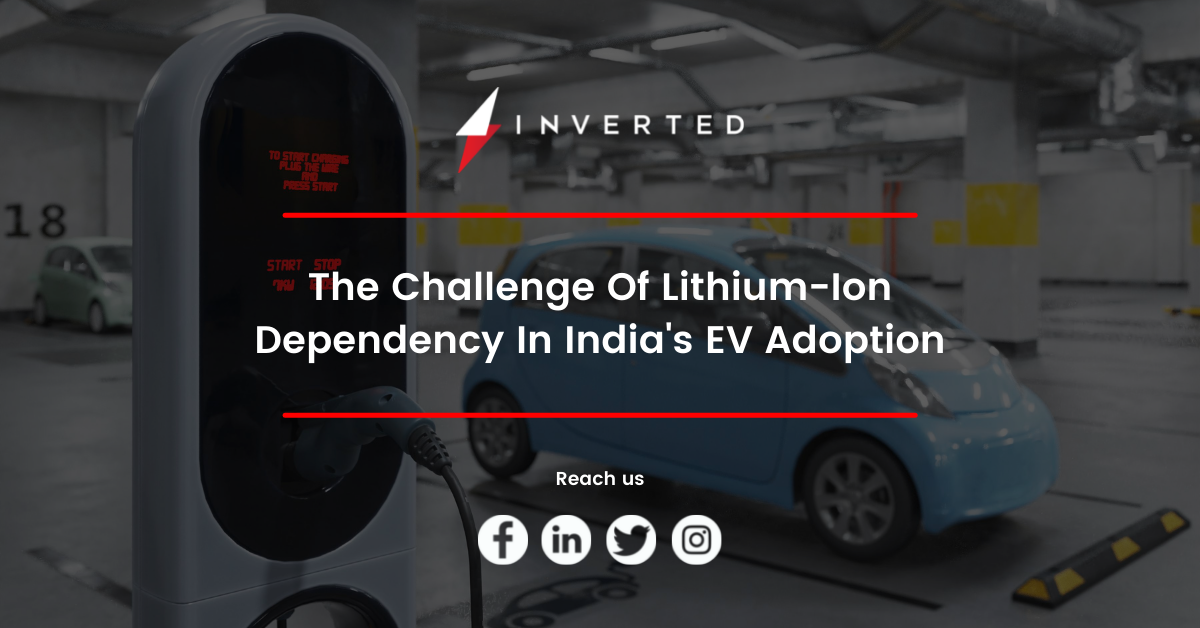 The majority of countries, including India, are transitioning to an electric vehicle age (EVs). General Motors, the world’s largest automaker, has declared that it would discontinue selling gasoline and diesel vehicles by 2035. Audi, a German company, also intends to stop making them by 2033.

Governments all over the world have developed roadmaps to accelerate the adoption of electric vehicles. By 2030, India hopes to have 30% of its highways covered by electric vehicles. The FAME 2 (Faster Adoption and Manufacturing of Hybrid and Electric Vehicles Phase II) scheme has set aside INR 10K Cr to encourage the use of electric vehicles to minimize pollution and crude oil imports.

As things return to normal, entrepreneurs and automakers are stepping up their game to ensure that the aim is met. However, the faster the adoption, the more lithium-ion batteries, which are used in EVs, would be consumed. These batteries generate electricity by transporting lithium ions from one layer, the anode, to another, the cathode, which is separated by an electrolyte layer. Rechargeable batteries are utilized in a variety of industries, including consumer electronics. A single EV contains roughly 10 kilograms of lithium, and the lithium-ion battery accounts for more than 40% of the cost of an EV in India.

Many reports, however, imply that lithium deposits are skewed over the planet. According to a research by CEEW The Council and Shakti Sustainable Energy Foundation titled “India’s Electric Vehicle Transition,” Chile has 58% of the world’s lithium reserves while China has 43% of rare earth mineral reserves. As a result, India imports massive amounts of lithium batteries.

India’s lithium imports surged by roughly 6.5 times between 2010 and 2017, according to an analysis by The Energy and Resources Institute (TERI). During his Lok Sabha speech on February 7, 2020, Harsh Vardhan, Union Minister of Science and Technology and Earth Sciences, stated that India bought 450 million units of lithium batteries for INR 6,600 crore ($929.26 million) in 2019-2020.

To address this problem, a few businesses in India are currently investigating alternatives to this technology.

The question now is whether these alternatives, or any other ways, can help India eliminate its reliance on lithium battery imports, and if so, when.

Only a few startups have successfully shown lithium-ion-alternative technologies.

“There are only a handful of Indian startups such as Log 9 Materials and ION Energy and few bigger companies such as RIL, MTAR, TATA Chemicals, KPIT and government entities such as CSIR, IOC, etc. working on innovation-led products in this space. Most of these organizations are still in their early days conducting research and pilot projects,” said Pratip Mazumdar, Partner, Inflexor Ventures.

Air and solid-state batteries made of aluminum have shown promise, but we have yet to see them mass-produced. Technologies based on hydrogen fuel cells, which have gained some adoption in the Japanese market, and graphene-led supercapacitors are two of the most intriguing and high-potential alternatives to Li-ion batteries. However, hydrogen fuel cells are said to be fraught with safety issues, as well as processing and supply chain issues.

“None of the startups have been able to get their products into the market yet. The real replacement for lithium-ion technology can only come in when someone can beat lithium-ion batteries tech specifications and at the same time, mass manufacture it to get the economics comparable to lithium-ion tech,” said Ashwin Shankar, founder, BatteryPool.

“If we look at the investment ecosystem in India, there has been very little funding that has gone into new battery technology,” he said.

However, Christie Fernandez, the founder, and CEO of Sooorya and a well-known expert in the EV area believes that alternatives to lithium batteries, such as hybrid lithium batteries and metal-air batteries, will gradually emerge in the market.

“Indian Oil Corporation Limited (IOCL) has a JV with Phinergy to set up manufacturing facilities for Aluminium-Air Batteries, which can be used to recharge EV batteries, extending the range of the vehicle. India also has a lot of solar energy production, which can be utilized to charge EVs and recharge swappable batteries,” he said.

This is also predicted to bring in a new era of riches in rural areas.

Some further argue that attempting to force-fit a single solution across all domains will just add to the difficulty of making the transition to EVs, and that complementing or supplemental technologies should be developed to better meet market demands.

According to the business, the technology is designed for intra-city use cases and is suited for Indian circumstances.

“Furthermore, the globally achieved manufacturing scale of these technologies is relatively small, meaning that India can compete and accomplish global leadership in the same, unlike conventional chemistries which require billions of dollars of investments on the first day to achieve competency,” said Akshay Singhal, founder, and CEO, Log 9 materials.

Even if the alternatives may take a long time to scale, many people believe that imports and mining for battery materials will decrease over time, as one of lithium batteries’ biggest advantages is that they can be recycled.

In addition, Gujarat will soon host India’s first lithium refinery, which will process lithium ore to make battery-grade material. According to sources, Manikaran Power Limited will invest more than INR 1,000 crore in the refinery’s construction.

“India can begin by focusing on niche technologies wherein our country can lead the industry and achieve global competency. Realizing the same will require setting up an industrial ecosystem involving urban mining of battery-grade raw materials, processing of electrode materials like graphite, the supply chain for ancillary components like a fuse, relays, connectors, steel casing, among others,” said Log 9 materials’ Singhal.

Learnings From Other Countries

There has been a lot of effort on lithium-ion replacements in the United States, Israel, Korea, and Japan. “The key thing for us to learn is how to aid innovation efficiently and create an enabling ecosystem,” said Inflexor Ventures’ Mazumdar.

“What we can learn from other countries is the fact that both public and private enterprises need to make significant investments into R&D for new battery technologies to have aspirations of being self-sufficient and drive a cleaner future for mobility in India,” added BatteryPool’s Shankar.

Some experts argue that unless we encourage indigenous creativity in sophisticated technology development, we will never be able to compete on a global scale with borrowed technologies.

“While the entire world is working towards further enhancements of battery technologies with Solid State Batteries, Supercapacitors, Liquid Metal Batteries, we are beginning to get overwhelmed with initiating our foray into manufacturing of conventional Li-Ion batteries. Many conventional Li-ion chemistries are unsuited for the Indian conditions, and there’s a need to build scalable niche technologies, the likes of supercapacitors, fuel cells, among others,” said Log9 Materials Singhal.

Alternatives, on the other hand, have a small number of individuals focused on product development and innovation. As a result, experts believe that more government funds are needed to boost R&D. Building long-term strategic alliances with lithium-rich countries, such as those in Africa and Australia, can also assist meet demand.

At Inverted Energy, we manufacture battery packs for 2W/3W EVs. we are associated with some of the leading EV manufacturers in India. To know more about our products, you can click here: